REAL WORLD is a series of Intermediate English lessons based on real world issues. 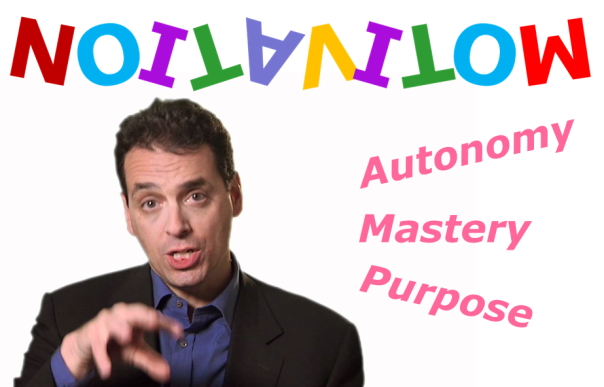 What is the secret of motivation? What drives some people to excel at what they do? Why are some organizations better at motivating their employees to stay and innovate, while others simply have employees who show up to do the work and leave as soon as possible.

Business writer and speaker Dan Pink believes that certain conditions and situations fire up the spark of motivation for many people in work environments. However, he doesn't believe those conditions are always related to the economics of their relationship with an employer.

In this lesson, we will enhance and empower our use of the English language by learning about the secret of motivation. Our focus will be a hand-drawn animated video where Dan Pink explains what he believes this secret is all about.


VIDEO: Let's WATCH it once and ANSWER the following questions?


TRANSCRIPT: Let's READ it and check to see if our answers are correct. Groups can delegate different members to read. Optionally, you can watch the video again after reading the transcript. You WILL NOTICE how much more you understand.

Later, you can also try to FIND the target vocabulary within the script and PRACTICE making your own sentences with it.

DAN PINK: Our motivations are unbelievably interesting, I mean... I've been working on this for a few years and I just find the topic still so amazingly engaging and interesting so I want to tell you about that. The science is really surprising. The science is a little bit freaky. OK? We are not as endlessly manipulable and as predictable as you would think. There's a whole set of unbelievably interesting studies. I want to give you two that call into question this idea that if you reward something you get more of the behavior you want. If you punish something, you get less of it.

So let's go from London to the mean streets of Cambridge, Massachusetts the northeastern part of the United States and let's talk about a study done at MIT Massachusetts Institute of Technology. Here's what they did: They took a whole group of students and they gave them a set of challenges. Things like memorizing strings of digits, solving word puzzles, other kinds of spacial puzzles even physical tasks like throwing a ball through a hoop. OK, they gave them these challenges and they said to incentivize their performance they gave them 3 levels of rewards. OK? So if you did pretty well, you got a small monetary reward. If you did medium well, you got a medium monetary reward. And if you did really well, if you were one of the top performers you got a large cash prize.


Ok, we've seen this movie before. This is essentially a typical motivation scheme within organizations right? We reward the very top performers we ignore the low performers and other folks in the middle. Ok, you get a little bit. So what happens? They do the test. They have these incentives. Here's what they found out.

1. As long as the task involved only mechanical skill bonuses worked as they would be expected the higher the pay, the better their performance. Ok, that makes sense, but here's what happens. But once the task calls for even rudimentary cognitive skill a larger reward led to poorer performance. Now this is strange, right? A larger reward led to poorer performance. How can that possibly be? Now what's interesting about this is that these folks here who did this are all economists: 2 at MIT, 1 at the University of Chicago, 1 at Carnegie Melanie: the top tier of the economics profession. And they're reaching this conclusion that seems contrary to what a lot of us learned in economics which is that the higher the reward, the better the performance. And they're saying that once you get above rudimentary cognitive skill it's the other way around which seems like the idea that these rewards don't work that way seems vaguely Left-Wing and Socialist, doesn't it? It's this kind of weird Socialist conspiracy.


For those of you who have these conspiracy theories I want to point out the notoriously left-wing socialist group that financed the research: The Federal Reserve Bank. So this the mainstream of the mainstream coming to a conclusion that's quite surprising seems to defy the laws of behavioral physics. So this is strange, a strange funny. So what do they do? They say... This is freaky. Let's go test it somewhere else. Maybe that 50 dollars or 60 dollars prize isn't sufficiently motivating for an MIT student, right? So let's go to a place where 50 dollars is actually more significant relatively.

What's interesting about this is that it actually isn't all that anomalous. This has been replicated over and over and over again by psychologists by sociologists and by economists, over and over and over again. For simple, straight-forward tasks, those kinds of incentives: if you do this then you get that, they're great! With tasks that are an algorithmic set of rules where you have to just follow along and get a right answer "If-then" rewards, carrots and sticks, outstanding!

But when the task gets more complicated when it requires some conceptual, creative thinking those kind of motivators demonstrably don't work. Fact: Money is a motivator, at work. But in a slightly strange way if you don't pay people enough they won't be motivated. What's curious about, there's another paradox here which is the best use of money as a motivator is to pay people enough to take the issue of money off the table. Pay people enough, so they are not thinking about money and they're thinking about the work. Now once you do that, it turns out there are 3 factors that the science shows, lead to better performance not to mention, personal satisfaction: autonomy, mastery, and purpose.

Autonomy is our desire to be self-directed: to direct our own lives. Now in many ways, traditional methods of management run afoul of that. Management is great if you want compliance, but if you want engagement which is what we want in the workforce today as people are doing more complicated, sophisticated things self-direction is better.


Let me give you some examples of this of the most radical forms of self-direction in the workplace, that lead to good results. Let's start with this company right here, Atlassian an Australian company. It's a software company and they do something really cool.

It turns out that one day of pure undiluted autonomy has led to a whole array of fixes for existing software a whole array of ideas for new products that otherwise have never emerged. One day. Now this is not an "if-then" incentive. This is not the sort of thing that I would have done 3 years ago before I knew this research. I would have said "You want people to be creative and innovative?" Give them a fricken innovation bonus. If you could do something cool, I'll give you 2,500 dollars.

They're not doing this at all. They're essentially saying you probably want to do something interesting. Let me just get out of your way. One day of autonomy produces things that never emerge.

Go back in time a little bit. I imagine this: If I went to my first economic's professor a woman named Mary Alice Shulman. And I went to her in 1983, and said "Professor Shulman, can I talk to you after class for a moment?" "Yeah." "I've got this inkling. I've got this idea for a business model. I just want to run it past to you.

Here's how it would work: You get a bunch of people around the world who are doing highly skilled work but they're willing to do it for free and volunteer their time 20, sometimes 30 hours a week." Ok, she's looking at you somewhat skeptically there. "Oh, but I'm not done. And then, what they create, they give it away, rather than sell it. It's going to be huge."

And she truly would have thought I was insane. All right, you seem to fly in the face of so many things but what do you have? You have Linux, powering 1 out of 4 corporate servers and Fortune 500 companies. Apache, powering more than the majority of web servers. Wikipedia...What's going on? Why are people doing this? Why are these people, many of whom are technically sophisticated highly skilled people who have jobs, ok? They have jobs! They're working at jobs for pay doing challenging, sophisticated, technological work. And yet, during their limited discretionary time they do equally, if not more, technically sophisticated work not for their employer, but for someone else for free! That's a strange economic behavior.

Economists who look into it "Why are they doing this?" It's overwhelmingly clear: Challenge in mastery along with making a contribution, that's it.

What you see more and more is a rise of what you might call the purpose motive. It's that more and more organizations want to have some kind of transcendent purpose partly because it makes coming to work better partly because that's the way to get better talent. And what we're seeing now is, in some ways when the profit motive becomes unmoored from the purpose motive bad things happen. Bad things ethically sometimes but also bad things just like, not good stuff: like crappy products like lame services, like uninspiring places to work.

That when the profit motive is paramount or when it becomes completely unhitched from the purpose motive people don't do great things. More and more organizations are realizing this and sort of disturbing the categories between what's profit and what's purpose. And I think that actually heralds something interesting. And I think that the companies, organizations that are flourishing whether they're profit, for-profit or somewhere in-between are animated by this purpose.

Let me give you a couple of examples. Here's the founder of Skype. He says our goal is to be disruptive but in the cause of making the world a better place. Pretty good purpose. Here's Steve Jobs. "I want to put a Ding in the universe." All right? That's the kind of thing that might get you up in the morning, racing to go to work. So I think that we are purpose maximizers, not only profit-maximizers. I think that the science shows that we care about mastery very, very deeply. And the science shows that we want to be self-directed.

And I think that the big take-away here is that if we start treating people like people and not assuming that they're simply horses you know, slower, smaller, better-smelling horses if we get past this kind of ideology of "carrots and sticks" and look at the science I think we can actually build organizations and work lives that make us better off but I also think they have the promise to make our world just a little bit better.


DISCUSSION QUESTIONS: If you belong to an English Practice Group or if you are a teacher, we recommend you discuss the following questions as a group.

ROLE PLAYING: If you belong to an English Practice Group or if you are a teacher, we recommend you role-play the following questions as a group.

Part A. Discuss in groups what would be a really good "autonomy" activity for special areas of  your company and prepare to share it with the other groups?

Part B. Prepare in groups strategies for taking more advantage of mastery among staff members (as defined by Dan Pink), but in benefit of your company.


Final Tip: watch the VIDEO one last time after the lesson and discussion and you will subconsciously incorporate a lot of the language you worked on.

That's the Real World!
Posted by Unknown at 10:00 AM No comments: