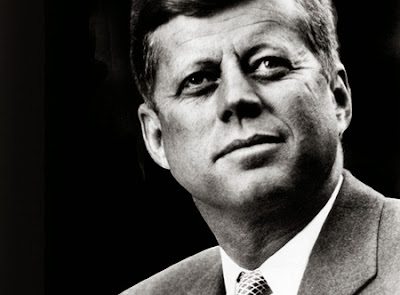 
JFK, as he was known, who was of Irish Catholic descent and a hero in the U.S. Navy during World War II. Although he was one of the most charismatic and popular presidents of the United States, he actually presided over the White House during the turbulent early 1960s.

Kennedy was considered one the leaders of the social challenges in the struggle known as the Civil Rights Movement. He was also a president who had to confront and make tough decisions during the height of the Cold War between the United States and the Soviet Union. He created the most important Space Program in US History. And many believe it was Kennedy who averted World War III during the Cuban Missile Crisis in October of 1962.

Nevertheless, his short and intense presidency ended in Dallas in November of 1963, victim of a plot that some believe remains unsolved to this day.

So as we review history as English Users, we can practice the Conditionals and ask: What if Kennedy survived Dallas? Now, in case you don't recall, we use the second conditional to speak of things which are either improbable or imaginary with a result in the present. The construction is as follows:


Curiously, addressing that same question is a recent book titled If Kennedy Lived written by author Jeff Greenfield. So as this is a work of speculative history, the situation also lends itself to further speculation and for that we need the third conditional, which allows us to wonder alternative possibilities, with a different result, but this time in the past.


What would have happened if JFK had survived? Want to practice conditionals? Try to see if you could you write three more examples in second conditional and three more in third conditional speculating a different outcome for JFK and maybe, the world.

Some good clues or ideas might be provided by knowing what he did during his time in office. The following documentary deals with that. If you have some time, English Users, you might want to check it out: