Author, speaker and international advisor Sir Ken Robinson is one of the premier experts on the science and art of education. In this humorous but thought-provoking video, he presents his vision on the need for a change in paradigm in our current education system. WATCH it once and then see if you can answer the questions below:


Of course, as an English User, we really recommend that you take full advantage of the rich language found in Ken Robinson's speech. So below, we provide for you the complete TRANSCRIPT for the session. ACTIVITY: If you are in an English class or group, this makes of a great DISCUSSION topic. Enjoy! 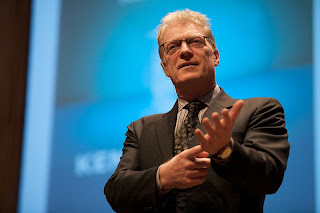 
Every country on earth at the moment is reforming public education. There are two reasons for it.
The first one is economic. People are trying to work out "How do we educate our children to take their place in the economies of the 21st century. How do we do that?"

Even though we can't anticipate what the economy will look like at the end of next week as the recent turmoil is demonstrating. How do you do that?

The second though is cultural. Every country on earth is trying to figure out how do we educate our children so they have a sense of cultural identity and so that we can pass on the cultural genes of our communities while being part of the process globalization. How do we square that circle?

The problem is they are trying to meet the future by doing what they did in the past. And on the way they are alienating millions of kids who don't see any purpose in going to school.

When we went to school we were kept there with the story, which is if you worked hard and did well and got a college degree you'd have a job. Our kids don't believe that and they are right not to by the way.

You are better having a degree than not, but it's not a guarantee anymore. And particularly not if the route to it marginalises most of the things that you think are important about yourself.

And people say we have to raise standards as if this is a breakthrough. You know. Really? Yes. We should. Why would you lower them, you know? I haven't come across the odd one that persuaded me of lowering them. But raising them, of course we should raise them.

The problem is that the current system of education was designed and conceived and structured for a different age. It was conceived in the intellectual culture of the Enlightenment, and in the economic circumstances of the Industrial Revolution. Before the middle of the 19th Century, there were no systems of public education.

Not really, I mean, you could get educated at [inaudible] Jesuit's if you had the money. But public education, paid for from taxation, compulsory to everybody, and free at the point of delivery - that was a revolutionary idea.

And many people objected to it. They said it's not possible for many street kids, working class children to benefit from public education. They're incapable of learning to read and write, why are we spending time on this?

So there's also built into [there] the whole series of assumptions about social structuring capacity. And it was driven by an economic imperative of the time, but running right through it was an intellectual model of the mind, which was essentially the Enlightenment view of intelligence - that real intelligence consists in the capacity for certain type of deductive reasoning and the knowledge of the classics [originate] - what we'd come to think of as academic ability.

And this is deep in the gene pool of public education that there are already two types of people: academic and non-academic.  Smart people and non-smart people.

And the consequence of that is that many brilliant people think they're not because they're being judged against this particular view of the mind. So we have twin pillars: economic and intellectual. And my view is that this model has caused chaos in many people's lives.

It's been great for some. - There have been people benefiting wonderfully from it. But most people have not. Instead they suffered this.

This is the modern epidemic, and it's as misplaced as fictitious. This is the plague of ADHD. Now this is a map of the instance of ADHD in America. Or prescriptions for ADHD.

Don't mistake me I don't mean to say there is no such thing as attention deficit disorder. I'm not qualified to say if there isn't such a thing. I know that a great majority of psychologists and pediatricians think there's such a thing. - but it's still a matter of debate.

What I do know for a fact is it's not an epidemic. These kids are being medicated as routinely as we have our tonsils taken out and on the same whimsical basis and for the same reason medical fashion.
Our children are living in the most intensely stimulating period in the history of the earth. They are being besieged with information and parse their attention from every platform, computers, from iPhones, from advertising holdings from hundreds of television channels.

And we are penalizing them for getting distracted. From what? Boring stuff. At school for the most part it seems to me not a conscience totally that the instance of ADHD has risen in parallel with the growth of standardized testing.

And these kids are being given Ritalin and Adderall and all manner of things. Often quite dangerous drugs to get them focused and calm them down. But according to this attention deficit disorder increases as you travel east across the country.

People start losing interest in Oklahoma. They can hardly think straight in Arkansas. And by the time they get to Washington they've lost it completely. And there are separate reasons for that, I believe.
It's a fictitious epidemic. If you think of it, the Arts - and I don't say this is exclusively the Arts, I think it's also true of Science and of Maths. I say about the Arts particularly because they are the victims of this mentality currently. Particularly.

And anaesthetic is when you shut your senses off, and deaden yourself what's happening and a lot of these drugs are that. We're getting our children through education by anaesthetising them. And I think we should be doing the exact opposite. We shouldn't be putting them asleep; we should be waking them up, to what they have inside of themselves.

But the model we have is this. It's I believe we have a system of education which is modelled on the interest of industrialism. and in the image of it. I'll give you a couple examples.

Schools are still pretty much organised on factory lines. On ringing bells, separate facilities, specialised into separate subjects. We still educate children by batches. You know, we put them through the system by age group. Why do we do that?

You know, why is there this assumption that the most important thing kids have in common is how old they are. You know, it's like the most important thing about them is their date of manufacture.
Well I know kids who are much better than other kids at the same age in different disciplines. You know, or at different times of the day, or better in smaller groups than in large groups or sometimes they want to be on their own.

If you are interested in the model of learning you don't start from this production line mentality. This is essentially about conformity. Increasingly it's about that as you look at the growth of standardised testing and standardised curricula and it's about standardisation.

I believe we've got go in the exact opposite direction. That's what I mean about changing the paradigm. There is a great study done recently on divergent thinking - Published a couple years ago. Divergent thinking isn't the same thing as creativity.

I define creativity as the process of having original ideas which have value. Divergent thinking isn't a synonym, but it's an essential capacity for creativity. It's the ability to see lots of possible answers to a question. Lots of possible ways of interpreting a question.

To think, what Edward de Bono publicly called laterally. To think not just in linear or convergent ways. To see multiple answers and not one.  So I made up a test for this. I mean one called the cod example would be people might be asked to say:

How many uses can you think of for a paper clip? Follows routine questions. Most people might come with 10 or 15. People who are good at this might come with 200. And they do that by saying. Well, could the paper clip be 200 foot tall and be made of foam rubber? You know... like does it have to be a paper clip as we know it, Jim?

The test is this. They gave them to 1500 people in a book called Breakpoint and Beyond. And on the protocol of the test if you scored above a certain level, you'd be considered to be a genius of divergent thinking.

So my question to you is: what percentage of the people tested of the 1500 scored genius level for divergent thinking? I need to know one more thing about them. These were kindergarten children.... So what do you think?

Now, this tells a interesting story. Because you could've imagined they're going the other way. Could you? You start off not being very good but you get better as you get older. But this shows 2 things: One is we all have this capacity and Two: It mostly deteriorates.

Now a lot have happened to these kids as they grown up, a lot. But one of the most important things happened that I'm convinced is that by now they've become educated. They spend 10 years in school being told there is one answer, it's at the back, and don't look. And don't copy because that's cheating.
I mean outside school that's called collaboration but, inside schools. This isn't because teachers wanted this way it's just because it happens that way. It's because it's in the gene pool of education. We have to think different about human capacity.

We have to get over this old conception of academic, non academic. Abstract, theoretical, vocational and see it for what it is: a Myth. Second, we have to recognize most great learning happens in groups.
That collaboration is the stuff of growth. If we atomize people and separate them a judge them separately, we form a kind of disjunction between them and their natural learning environment.

And thirdly, it's crucially about the culture of our institutions. The habits of institutions and the habitats that they occupy.