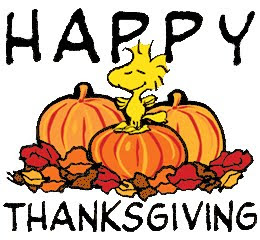 Thanksgiving Day, also known as "Turkey Day," is a harvest festival celebrated primarily in the United States and Canada. Its name refers to expressing thankfulness, gratitude, and appreciation. It's also a time for family and friends to get together.

Traditionally, it has been a time to give thanks for a bountiful harvest. And with the passing of time, this holiday has since moved away from its religious roots.

In Canada, Thanksgiving Day is celebrated on the second Monday in October. In the United States, it falls on the fourth Thursday of November.

The precise historical origin of the holiday is disputed. Although Americans commonly believe that the first Thanksgiving happened in 1621 at Plymouth, Massachusetts, there is strong evidence for earlier celebrations in Canada (1578) and by Spanish explorers in Florida (1565).

Thanksgiving and the turkey dinner it's identified with are also commonly found in American pop culture.

Thank you for you stopping by and Happy Thanksgiving from PLS English Users!
Posted by Unknown at 4:37 PM